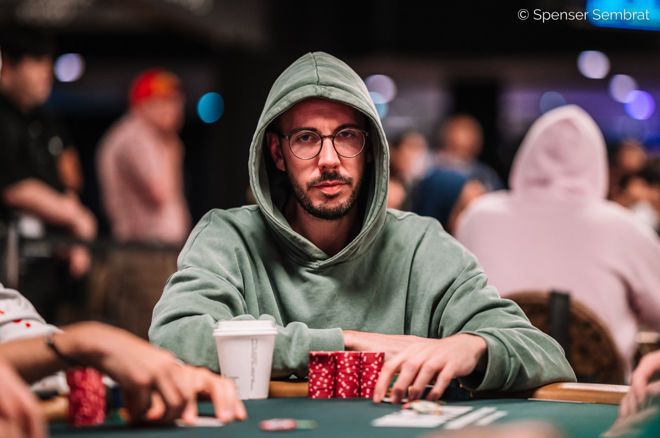 Another World Series of Poker (WSOP) bracelet was won last night on GGPoker, with Jonas Lauck being the fortunate player to get their hands on a piece of WSOP hardware. The German captured his second WSOP bracelet after topping the field in Event #6: $800 Monster Stack for $173,224.

There was another player who had a night to remember on the online platform. The United States’ Scott Ball miraculously pulled the $1 million bounty in the Mystery Bounty bracelet event within the first five minutes of Day 2 starting.

Justin Bonomo also found himself in pole position for another big score, as he leads the final table in this weeks Super MILLION$ $10,300 High Roller.

Day 2 of the MONSTER STACK began with just 36 players remaining from the initial 1,797 entry field, with Greece’s Ioannis Konstas leading the pack when play resumed. The nine finalists were quickly established after the likes of Alexios Zervos (12th – $8,120), Aditya Agarwal (14th – $7,127) and Stoyan Obreshkov (21st – $6,255) hit the rail before final table play began.

Konstas became the first final table casualty despite starting the day with the biggest stack. He saw his bankroll boosted by a further $17,332. Two Brazilian Players, Rafael “OpalaPreto” Monteiro and Rodrigo “sauvage” Valente departed in eighth and seventh place respectively before a pair of Norwegian players were ousted from the tournament. Simon Mattsson collected a payday of $41,078 while Yngve Steen went one better and was awarded the fifth place prize of $54,778.

The elimination of Anton “Kingtale” Wigg set up the final three, with Lauck and Yuri Dzivielevski looking to add to their bracelet collection while Ilya Anatski was seeking their first. Dzivielevski became the third Brazilian to leave the final table which set up the heads-up battle between the two remaining players.

When the dust settled, Lauck took down the event to win Bracelet No. 2 and claimed the $173,224 up top. The victory comes three years after he was awarded his maiden bracelet, where he won Event #56: $1,500 Super Turbo Bounty at the 2019 WSOP.

All eyes were on Day 2 of the Event #7: Million Dollar Mystery Bounty last night, as the bounties finally came into play. As you would expect, much of the chatter focused on who would win the top seven-figure bounty prize. The speculation of who would be the fortunate player to pull the milly quickly died down as Scott Ball was awarded with the life-changing sum of money within the first five minutes of the tournament getting underway.

Massive congrats go out to Scott Ball aka @EndGameScott aka “ItsRumcake” who drew the $1,000,000 bounty on Day 2 of… https://t.co/xrR1NKuqjs

The Mystery Bounty saw 51,003 total entries, which created the $10,200,600 prize pool, eclipsing the $10 million guarantee. There were 5,797 players who managed to pilot a stack through to Day 2, however only the top 4,800 would make the paid places. Those who survived the bubble locked up a minimum payday of $309.

Only nine players now remain in the event, which each player securing a cash worth at least $34,870. The WSOP bracelet and $348,723 up top await the eventual winner, with the final table playing out on August 27, at 6 p.m. UTC.

Two Dutch players sit on top of the chip counts. Mark Waal and Timo de Smet were the only players to finish with more that 250,000,000 chips but as we all know from the 2022 EPT Barcelona Main Event, it only takes is a chip and chair for the tides to turn.

Poker fans will be able to follow the action from the final table, as it is being broadcasted on GGPoker’s Twitch Channel with commentary being provided by GGPoker ambassadors Ali Nejad and Jeff Gross.

With all the WSOP action taking place on GGPoker, you’d be forgiven for letting the latest Super MILLION$ High Roller slip your mind. Well, you can get up to speed with the quick preview of the final table.

The tournament saw 137 entries, with each player putting in the $10,300 buy-in. They generated a prize pool of $1,360,000 with just the final 15 making the paid places. Online crushers like Benjamin Rolle, Wiktor MalinowskiWiktor Malinowski and Fedor Holz all finished outside the money.

As mentioned, Bonomo tops the final nine and is the only player with more than 3,000,000 in their stack. He’ll be up against it as the final table is stacked with a host poker’s elite players. Be sure to find out how the tournament plays out as GGPoker will also be streaming this event on their Twitch channel, which begins at 6 p.m. UTC on August 23.

Get In On The GGPoker Action With a $600 Welcome Bonus

Now is the time to join GGPoker if you do not already have an account. Download GGPoker via PokerNews, create your account, and make your first deposit knowing GGPoker matches your initial deposit 100% up to a maximum of $600.

The bonus releases into your playable account balance in $1 increments each time you contribute $5 in net cash game rake or pay in tournament fees. You have a full 90 days to release as much of the bonus as possible.

In addition, new depositing players can get involved in the Honeymoon promotion. The promotion revolves around completing daily challenges. Completing just three see you win a prize. Complete all 30 and you will have received $170 worth of cash and $180 in other rewards on top of your $600 welcome bonus!

Calum has been a part of the PokerNews team since September 2021 after working in the UK energy sector. He played his first hand of poker in 2017 and immediately fell in love with the game. Calum’s proudest poker achievement is winning the only tournament he has ever played in Las Vegas, the prestigious $60 Flamingo evening event.