On Saturday, November 13th, 2021 there are several qualifying European football matches in which France, Belgium, and the Netherlands can all win their group and automatically qualify for the 2022 World Cup which will be hosted by Qatar next year. 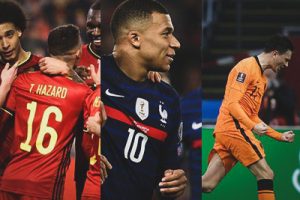 The defending World Cup champions in France can secure their spot in the 2022 World Cup hosted by Qatar if they defeat the last – place (Group D) Kazakhstan this Saturday. Les Bleus will be playing without the injured footballer, Paul Pogba, who usually dominates the midfield, so either Aurelien Tchouameni or Adrien Rabiot may be provided the start in place of Pogba to kick it around with N’Golo Kante in Parc des Princes, where Rabiot previously played for Paris Saint – Germain. Recently Tchouameni has been quite impressive for Monaco’s football club and placed in fluently in the international football landscape ever since he made his introduction a couple of months ago. Lately Rabiot’s game has proven to be patchy for a sub – par Juventus football club so far this year. France is a very heavy favorite to win Group D of these qualifying matches for the 2022 World Cup. In the other contests in the group, Bosnia and Herzegovina will host Finland during the afternoon in Zenica.

In Group E play of the 2022 World Cup qualifiers Belgium will face off against Estonia this Saturday, but recently Belgium has been plagued by an assortment of injuries prior to this weekend’s important game. The list of Belgium players out due to injury include Romelu Lukaku, Michy Batshuayi, Jeremy Doku, Thomas Vermaelen, Youri Tielemans, and Toby Alderweireld. Presently Belgium is 5 – points ahead of the Czech Republic as well as Wales, and Belgium will qualify with a win this weekend, or if the 3rd – place in Group E, Wales, does not defeat Belarus in their upcoming match. Due to the fact that Belgium will be without the services of Lukaku, Christian Benteke will be leaned on in leading the attack of the Red Devils’. According to the Belgian federation. King Baudouin Stadium is expecting over 35,000 spectators to attend this match which marks just the 2nd occasion since the COVID – 19 pandemic fiercely hit the world that many people will be permitted.

Then over in Group G of these World Cup qualifiers the Netherlands, who actually had to miss out of the 2018 World Cup that was played out in Russia, currently possess a 2 – point advantage and the Netherlands can secure their spot in the 2022 World Cup by qualifying as the 1st – place team in Group G with a victory over Montenegro this weekend. For that to happen though they would have to depend on 2nd – place Norway not defeating Latvia at home. Otherwise, Group G will be resolved during the final – round of these qualifying group games on Tuesday, November 16th, 2021. Joël Drommel is out of the match due to an illness, Steven Berghuis, and Jurriën Timber are out of the contest due to injuries for the Dutch side, although Steven Bergwijn, Jasper Cillessen, and Devyne Rensch are currently available for the Netherlands’ head coach, Louis van Gaal’s, national football club. The Montenegro side will be playing without their star player, Stevan Jovetic, as he just tested positive for COVID – 19 recently.