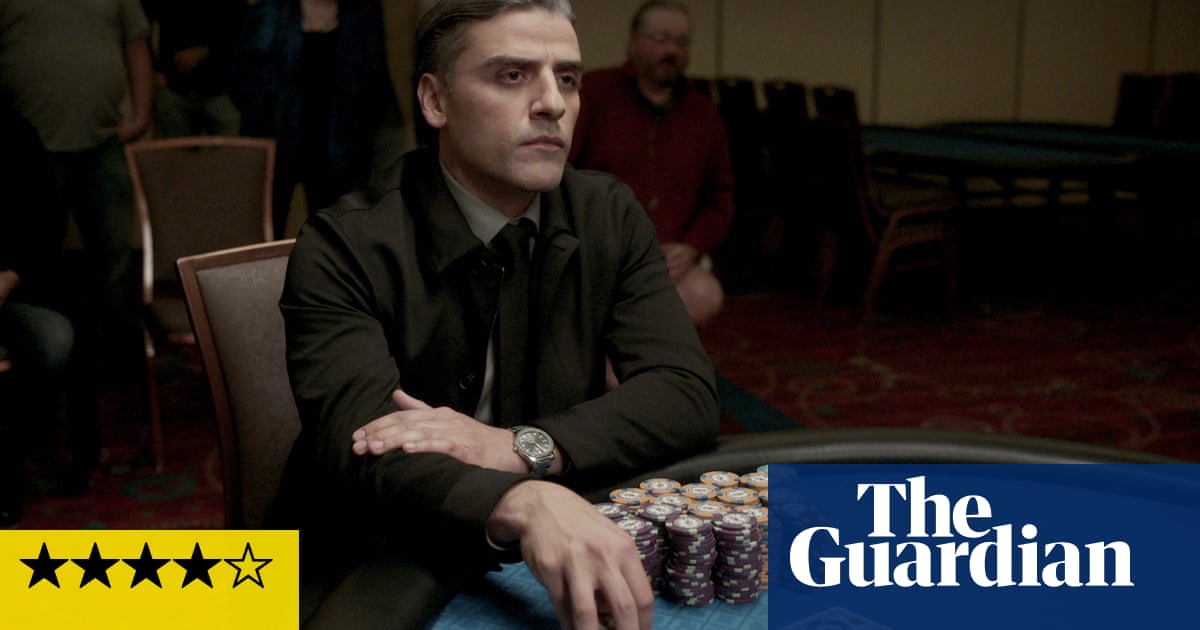 Here is a film about gambling from writer-director Paul Schrader and producer Martin Scorsese that begins with a closeup of the queen of spades – I’m betting it’s a sly reference to the Thorold Dickinson classic of the same title, about the game Faro, in which that card is such a terrible omen of ill fortune.

Schrader has created another drama about obsessive masculinity, fragile hope and potent despair competing for dominance in the heart of a man roaming a nocturnal world of sin – naturally it’s impossible not to see the echo of Schrader’s screenplay for the 1976 classic Taxi Driver. What did Travis Bickle actually do in Vietnam? (Or is the whole point that we don’t know?) And what if instead of a young girl Travis was trying to redeem it was a young man, a younger version of himself?

In various small-scale casinos across the US – not in the Vegas league – a professional gambler discreetly plies his trade: this is William “Tell” Tillich, played by Oscar Isaac, his seductive sleepy-eyed address to the camera making him look tired, gaunt and even lizardly. William counts cards at blackjack: that is, by memorising every card played, he can calculate the moment at which to bet big, but knows enough to keep his winnings modest to avoid getting barred. In any case he is more interested in poker. William has learned fierce personal discipline, card skills and toxic self-hate in military prison. In every budget motel he stays, William takes all the pictures down and wraps the furnishings in sackcloth to make his room like a cell, or something worse than that.

During a hotel poker tournament, William wanders into a commercial convention on ex-military security techniques and comes across a certain young man: Cirk (Tye Sheridan). Cirk makes William an offer: to help him kill someone of their mutual acquaintance. William counter-offers: Cirk can come on the road with him and learn the world of gambling. Does William want to mentor Cirk – teach him to channel this rage and hurt into the casinos’ soulless but harmless world the way he has done? But William doesn’t seem to be teaching Cirk anything concrete about card games: is this just a cover so he can co-opt Cirk’s murderous plan?

Schrader’s movie is great at showing the airless, affectless world of the casino itself, as well as the grim setup of the poker tournaments in the opening rounds, with contestants squashed together in something as unglamorous as a bingo hall. Robert Altman’s gambling movie California Split from 1974 showed something similar, and William and Cirk are a bit like a less intimate version of the tragicomic buddy pairing of George Segal and Elliott Gould in that film, or perhaps more like Philip Baker Hall and John C Reilly’s master-pupil gambling relationship in Paul Thomas Anderson’s Hard Eight in 1996.

Cirk has come into William’s life at the exact moment that something good is happening to him, if only he could see it. Gambler turned talent spotter La Linda, played by Tiffany Haddish, asks William if he would be interested in turning pro for various high-roller backers of her acquaintance: but actually she has feelings for this coolly reserved tough guy, and the always-likable Haddish nicely conveys her hurt feelings when William maladroitly tells her how much their “friendship” means to him.

Schrader has carpentered a strong and vehement film, hypnotically watchable and squalid with nightmarish flashbacks and a typically apocalyptic ending that grows plausibly enough out of what has gone before. There’s a horrible, queasy urgency to this high-stakes game.