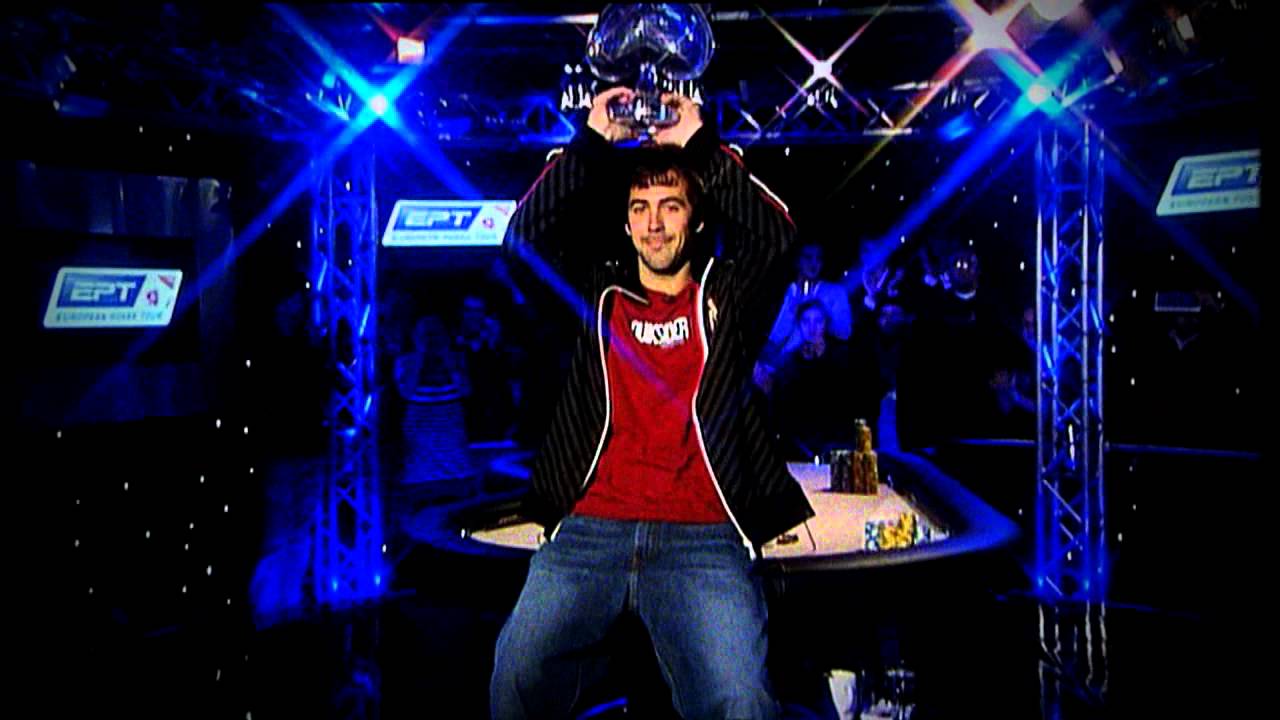 A poker rap written and performed by rapper Nick Javas, ‘Ride on the River’ celebrates the EPT’s rich 10 year history, featuring the highs, lows and all its colourful characters of becoming a poker star

‘RIDE ON THE RIVER’

As I set forth on this journey, may the Gods of this game continue to bless me with the gifts of good fortune. I ask that you grant me the power to hold my ego at bay in the face of adversity, the strength to choose patience over greed, and a trustworthy gut that knows when to lay down and when to fight. Once that decision is made, I leave my fate in your hands. I have faith that you’ll be there to guide me along this ride on the river.

When Stevic would get in the record book out of the gate, original champion
Not far behind him…star risin…currently king of the cash in
Luca…Pagano…Huge bucks…broncos
Still no title yet (not yet)…Never know, he might be next

Antonius a day late by the time he got in
Started at the bottom, Finnish on the top in Baden
I’m thinkin Johnny Lodden’s ridin’ right there on the brink
Of his first EPT win, but what does Johnny think?

Ivey widely regarded as the greatest on the scene
Still no number 1, but number 2 in season 3
At chips end by Big Ben the big story was
Victory for Vic Coren at Victoria

Season 4 we saw 2 new cities on the tour
Expanded that casino, PCA and San Remo
Elky earned a new moniker, by the quick way that those chips came
Mr. PCA…leading the way…and heyyy…a new nickname

First time in San Remo victory would go to Jay Mercy
First time on the live circuit, worthy of that first seed
Got it again in a year, way to begin a career
The only difference here, now the original high roller title holder, COME ON!

In Germany, McDonald only 18…years old
Maybe grinning silver, but that baby’s winnin gold!
Nearly got that win again in Dortmund Season 5
Path blocked by a Black Mamba, only she survived

Season 6, make a LIV-ing with the chips
Twelve hundred and forty…fell short, except Boeree
Super High Rollers, need a hundred K to play
Katchalov would go snatch it all in the first at PCA

Monte Carlo, Season 9, Grand Final,
Searchin for that first win, was Lodden and Negreanu
Mercier and Cody hopin’ to pioneer a title pair
Smoke finally cleared, only O’Dwyer in that chair

So the jinx lives on, even after 9 years,
We’ve never seen a double, gotta say that’s kinda weird
Matter of time indeed, it might be seen in Season 10
Sit back, enjoy the ride as that new season begins

Don’t miss out on the next episode or any of our videos. Subscribe here: http://psta.rs/YTSL

For all the latest online and live poker news, be sure to visit: http://PokerStarsBlog.com

PokerStars operates the world’s most popular online poker sites, serving a global poker community of more than 63 million registered members. Since it launched in 2001, PokerStars has become the first choice of the world’s top players, with more daily tournaments than anywhere else and with the best security online. More than 110 billion hands have been dealt on PokerStars, which is more than any other site. Keep it cool, Keep it fun, Play Responsibly: https://www.pokerstars.net/about/responsible-gaming/