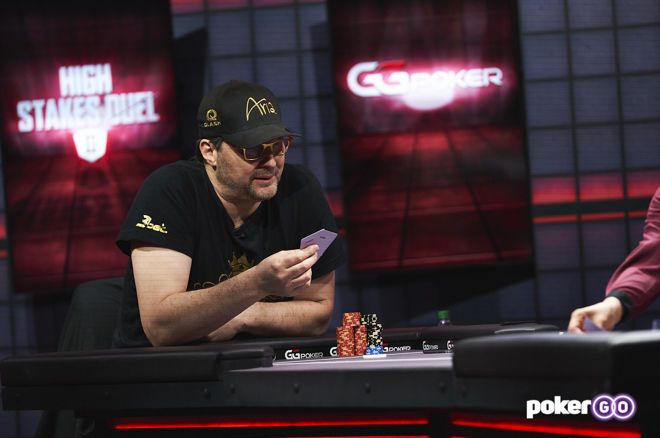 Following last week’s strategy column in which Phil Hellmuth got out of line against Daniel Negreanu in the $100,000 Round 2 of High Stakes Duel II, this week I look at a hand in which the “Poker Brat” switches gears into “ZOOM ZOOM” mode and puts Negreanu in a tough spot! What do you think about Hellmuth’s fast play?

“Negreanu had to try to determine what percentage of hands Hellmuth would three-bet for value to help decide on how to proceed.”

Negreanu previously said in an interview with me that he believed Hellmuth was three-betting only his premium-made hands and the bottom of his range. So in this spot, Negreanu had to try to determine what percentage of hands Hellmuth would three-bet for value to help decide on how to proceed. If Hellmuth has any post-flop tendencies that will expose his hand strength, Negreanu should be more inclined to call.

Negreanu did call and the flop came down

, which saw Hellmuth continue for 13,000. Against a player that plays optimal GTO strategy, Negreanu should always be calling in position with his backdoor equity. On the flip side, if Hellmuth’s range is heavily weighted towards value hands, Negreanu should be looking to fold.

If Negreanu calls the flop, Hellmuth will roughly have a pot-sized bet left. If Hellmuth bets large or all in on the turn, then Negreanu will have to fold even if he picks up extra equity with his backdoor draws, so it’s actually a tricky spot.

If Negreanu believes that Hellmuth could have a decent proportion of bluffs in his range then he should look to call. Always try to make a conscious effort to see if your opponents mix their strategies or if they will only play a specific way all of the time.

If Hellmuth will often give up his three-bet bluffs on the turn then Negreanu should be incentivized to float extremely wide on the flop looking to win the pot on the turn or river.

appeared on the turn giving him straight and flush draws. However, Hellmuth fired out 28,000, nearly half his remaining stack. What would you do in Negreanu’s shoes?

Negreanu needs approximately 25% equity for this to be considered a profitable call. With his flush and straight outs, he has roughly 28% equity. As such, folding should be taken out of the equation and the question becomes should Negreanu call or move all in?

When considering whether to raise all in as a semi-bluff you should always ask yourself whether you think your opponents will ever decide to fold. Again harkening back to his interview with me, Negreanu said he believes that Hellmuth will often only barrel with premium-made hands, most of which will be unlikely to fold if Negreanu goes all in.

“Negreanu would rather call and give himself the option to fold the river on a blank card than go all in and risk a large percentage of his stack with only 28% equity.”

For that reason, I don’t like a jam. When you have good equity you usually want to try and realize that equity as cheaply as possible. Negreanu would rather call and give himself the option to fold the river on a blank card than go all in and risk a large percentage of his stack with only 28% equity.

When you have no fold equity and are clearly behind, you should only look to call, which is what Negreanu did. The

river paired him but wasn’t exactly the card he was hoping for. Expectedly, Hellmuth moved all in for his last 32,000, and Negreanu could still essentially only beat bluffs.

Negreanu needed to win approximately 18% of the time or more for this to be a profitable call. If he believed that Hellmuth would not take such an aggressive line with complete air then he should be able to easily find a fold on the river. Indeed, Negreanu folded and Hellmuth was actually on the bluff with the

He kept the pressure on by continuing on the flop – the preflop raiser should often continuation-bet on paired boards – and then he bet big on the turn. Had Negreanu raised the turn with his open-ended straight flush draw, Hellmuth would probably have to call off his remaining stack with his flush draw as he was pot committed after using that particular bet size.

For more on this hand, check out my breakdown in the following video:

Jonathan Little is a professional poker player and author with over $7,000,000 in live tournament earnings. He writes a weekly educational blog and hosts a podcast at JonathanLittlePoker.com. Sign up to learn poker from Jonathan for free at PokerCoaching.com. You can follow him on Twitter @JonathanLittle.