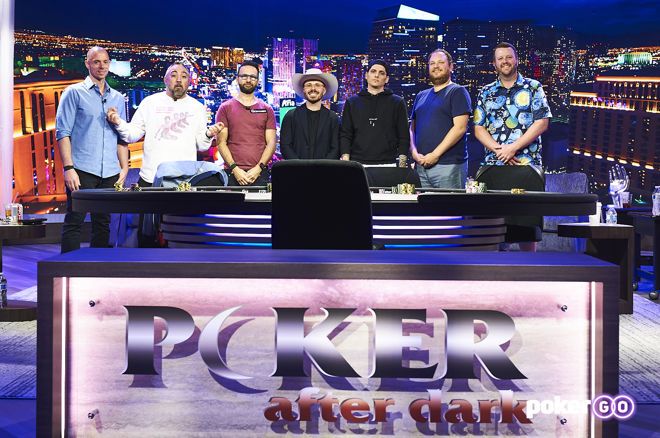 On Monday night, PokerGO aired the second episode of “Poker After Dark” Season 13, which was Part 2 of “The Nosebleeds.”

The game was $200/$400 no-limit hold’em with a $400 big blind ante. The minimum buy-in was $40,000 with no max. MJ Gonzales, who some might know as Daniel Negreanu’s poker coach, and Zach Franzi both made their Poker After Dark debuts the week before. They were once agin joined by Negreanu, Scott Seiver, Matt Berkey, and Dan Smith. Also, the game expanded from six-handed to seven as Jake Daniels took a seat in the game.

Below is a look at five of either the biggest or most interesting hands from this week’s episode. Also, here’s a look at the stacks at the top of the broadcast:

Franzi raised the cutoff to $1,100 holding the

and Berkey three-bet to $4,000 from the small blind with the

. Franzi called and then called a continuation-bet of $1,500 from Berkey on the

turn, Berkey checked top pair and Franzi bet $4,400 with just ace-high. Berkey called and then checked again on the

Franzi looked down at the

river, which gave him top two pair. Seiver checked it and Franzi, who made his straight, tossed out a bet of $15,100. Seiver didn’t seem happy about it but called after thinking about it for a couple of minutes. Ship the $78,000 pot to Franzi.

Berkey raised to $1,000 from middle position with the

in the cutoff. Not to be outdone, Berkey four-bet to $11,500, and Gonzales opted to call. He was no doubt happy he did too as the

flop delivered him a set.

With an ace on board, Berkey checked it and Gonzales bet just $4,000. With straight and backdoor flush draws, Berkey called and the dealer burned and turned the

and Seiver defended his big blind with the

. Seiver check-called a bet of $800 with bottom pair, which turned into trips on the

Seiver checked it again and just called when Daniels bet $3,100.

river was a brick and Seiver coyly checked for the third time. Daniels bet $10,500 and Seiver, who only had $23,800 total, paused for a few beats before check-raising all in. Daniels called and saw the $58,000 pot claimed by Seiver.

Seiver raised to $1,000 from middle position with the

and Franzi called with the

. Smith came along from the big blind with the

and it was three-way action to the

Smith just called and the

CRAZY Flop, Turn AND River 😲 #Shorts
BIG BONUS 🌪 Money Storm Deluxe $25/Bet!
The Blackjack Basic Strategy Card – Why You Need It and How To Use it
Patrik Antonius Holds Ace-High Flush vs Quads!
Young Poker Pro Gets Owned by Old French Player! #shorts